This article is mainly based on the article "Aviation Knowledge", "a 10 cm long pin, let 114 people hang a line, see the crew god level forced to turn the tide" rewrite.

Time Back On November 5, 1997, a Virgin Atlantic Airbus A340 aircraft carrying 117 passengers and crew members was flying from Los Angeles International Airport to London Heathrow Airport. There was no abnormality in the flight.

Until the 15 km from Heathrow Airport, the crew put down the landing gear handle according to the procedure, but the instrument showed â€œthe landing gear was not put down and lockedâ€, and the left main landing gear indicator also showed abnormality!

At 15:04, the crew decided to go around and tried to perform the lifting and landing procedure by gravity. However, it did not have any effect, and the left landing gear still showed an abnormality.

At this moment, the aircraft has only 5.4 tons of jet fuel left, and the time is getting more and more urgent.

At 16:08, the captain announced "Mayday" (emergency) and began to prepare for an emergency landing. The specific plan was to close the two outer engines (engines No. 1 and No. 4) most likely to collide with the ground before the aircraft was grounded. Turn off the No. 2 engine before the left tilt of the aircraft, and finally turn off the No. 3 engine. In addition, considering that the main landing gear is not designed to withstand asymmetric loads, it is folded up before approaching to avoid threatening the fuselage structure after it is broken.

Fortunately, the captain with 14,000 hours of flight experience was in danger, and the crew completed the feat of a single landing gear safety landing. During the landing, only a slight burning of the engine occurred, and all four tires on the right landing gear burst, and the crew and 117 passengers were safe.

So why can't the left landing gear be put down?

After on-site investigation, the cause is that the anti-torsion arm of the brake actuator on the inner side of the left landing gear is loose at one end, and is displaced on the keel beam of the landing gear wheel, which causes the landing gear to be unable to be lowered. 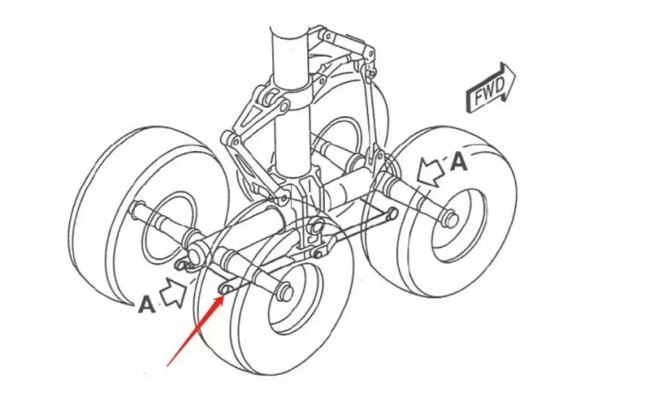 Why is this anti-torsion arm loose?

It turns out that the fixing pin for connecting the anti-torch arm to the brake actuator is missing...

Later, this pin was found at the end of the 24L runway at Los Angeles International Airport where the plane took off...

As for the nuts and cotter pins installed at the other end of the pin, there is no trace.

So why is the pin off?

After this battle, the A340 aircraft was seriously damaged, but it was restored to the blue sky after being repaired. In 2004, it was transferred from Virgin Atlantic to Trinidad and Tobago and continued to serve until 2008. It was dismantled in 2009.